The end is finally in sight for one of the Bay Area’s longest-running highway projects: the Marin-Sonoma Narrows widening on Highway 101, where construction has been going on for over a decade.

By July 2026, the final stretch of the project to unlock one of the Bay Area’s nastiest traffic choke points should be completed, Caltrans and North Bay transportation officials said.

Construction started this month on the final stretch of the complicated project to widen the highway near the point where it straddles the Marin-Sonoma county line by adding a part-time carpool lane.

Transportation officials and dignitaries held a ribbon-cutting ceremony this week to mark the beginning of the end. 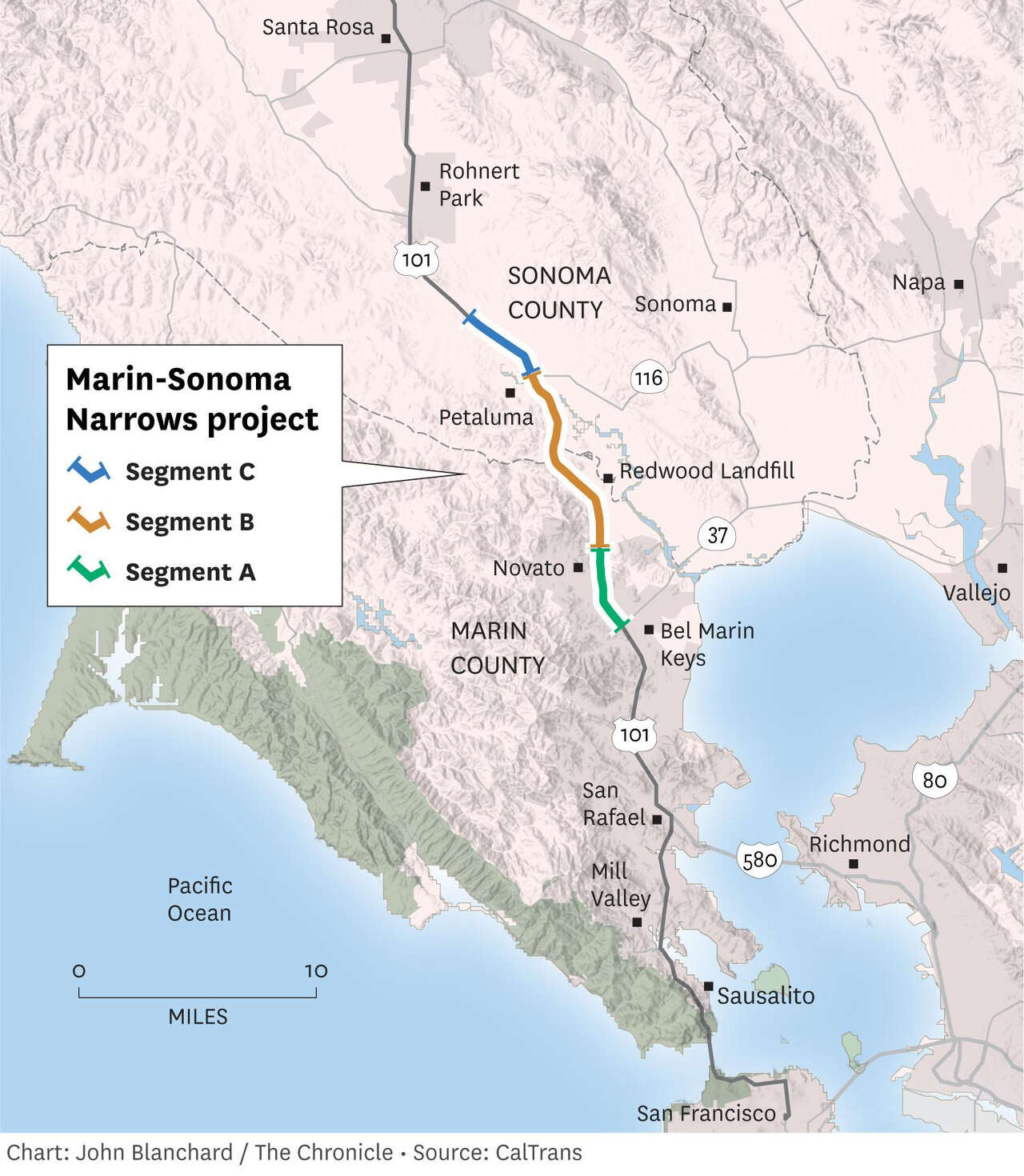 If it seems like construction on Highway 101 between Novato and Petaluma has been going on forever, there’s a good reason.

Work on expanding the Narrows, often referred to on traffic reports as the Novato Narrows, started in August 2011, according to Caltrans spokesperson Matt O’Donnell. But if planning, engineering and design work is factored in, work to widen the Narrows extends back at least two decades.

The current phase of the project is estimated to cost $135 million, according to Caltrans.

The entire project, when completed, will add 17 miles of new lanes in each direction, plus parallel bike trails and frontage roads, at an estimated cost of $762 million.

Work on the project has included realigning the highway in places, widening bridges — including the span across the Petaluma River — and raising the roadway out of the floodplain.

Meanwhile, commuters fumed as they sat stuck in slow-moving traffic, which tends to be particularly painful in the evenings, especially on Fridays when weekend travelers join the parade of cars heading north.

So why has it taken so long?

While frustrated motorists may see the work as a single project, Caltrans Bay Area spokesperson Bart Ney said it was a series of individual projects painstakingly coordinated with regional and county transportation agencies then pieced together like an asphalt and concrete puzzle — all while the highway remained open and traffic continued to flow and back up.

A big part of the challenge also involved finding funding for the project, which is being paid for with a complicated combination of federal, state, regional and local money, including toll bridge revenues.

“We are extremely pleased to reach this milestone and begin construction on this last section of carpool lanes in Marin County,” said Anne Richman, executive director of the Transportation Authority of Marin.

“This is an important project for regional transportation and our commuters. After many years of progress, it’s great to see construction starting on the last piece of the puzzle,” Richman said.

Multi-alarm fire breaks out in Boston high rise under construction