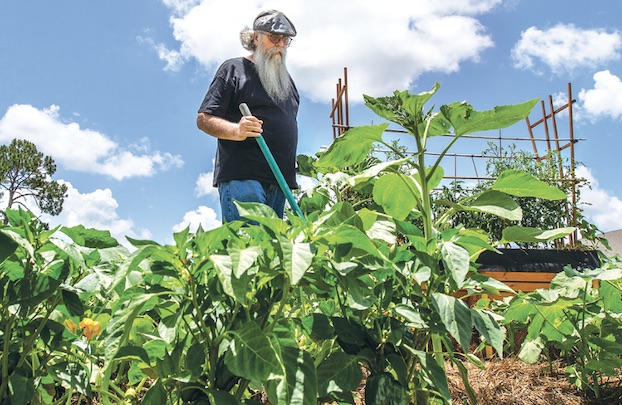 The Rev. Tim Norris, pastor of St. Paul Lutheran Church, looks over the vegetables growing on the site where the sanctuary once stood. (Rick HIckman / American Press)

Members of St. Paul Lutheran Church have found a silver lining since Hurricane Laura’s devastation nearly two years ago by discovering a way to nourish both the souls and bodies within their community.

The Rev. Tim Norris said on the remains of what was their church’s sanctuary at 1620 E. Prien Lake Road now sits the beginnings of a community garden as well as a little red food pantry.

“We have five acres that have to be mowed and this turns a liability into an asset,” Norris said with a laugh.

“Right now we keep it in a 15-by-15 foot space but we’re hoping down the line others will want to come learn how to garden and help us make it thrive,” Norris said.

Adjacent to the vegetable garden is a separate flower garden designed to attract pollinating insects.

“Between the three of us, what we have is enough to keep us busy,” Norris said of the first phase of planting what he hopes will ultimately provide enough bounty to feed the neighborhood as well as help stock shelves at United Way of Southwest Louisiana and Abraham’s Tent.

Norris said a feasibility study has shown it will take about $300 for every $100 worth of vegetables the church produces initially.

“But it’s so worthwhile,” he added.

The garden is located in what used to be the corner of the sanctuary where the organist, pianist and keyboardist sat during Sunday services. The building was demolished shortly after the storm and the church has been meeting ever since inside their fellowship hall, which only needed minor repairs and served as a distribution site for food and supplies as residents returned home following the mandatory evacuation orders.

Norris said the space feels a little cramped at times, but their plan is to wait two or three more years — when more contractors become available — before starting the rebuilding process. They’re also considering constructing a multi-purpose building that would serve as both a sanctuary, hurricane shelter and meeting place for community members.

“It was pretty tough to see the sanctuary destroyed,” he said. “It was a very, very nice sanctuary and to see it smashed was heart-wrenching. A lot of people didn’t realize how bad it was.”

He said a former member of their church who passed through town after Hurricane Laura, stopped at the site of the church to grieve the building that was the setting for so many of her childhood memories.

“She grew up here and had a lot of memories and it was hard for her — and a lot of other people, too — to see the building now gone. She just sat in the parking lot and cried,” he said. “But we have a clean slate now, a blank canvas and we’re going to start something new.”

Norris said he spent time with community leaders about the need for such a garden before turning the dirt.

“Pretty consistently they talked about food scarcity problems in this area, if not it being a food desert,” he said. “This is one way of addressing that. It’s just a start but hopefully it goes well and we can start planning for expansion.”

Norris said he plans to apply for grants that will allow him to do just that.

“Our denomination has some dedicated funds for us to further explore that and design our mission and ministry toward meeting the needs of the community,” he said.

The church’s little red food pantry has also been set up in the church’s parking lot to help those “who fall through the cracks.”

“It’s for the transient, homeless or those who need a few things to feed their families dinner when food stamps run out,” he said. “It’s there for people to help themselves. We also have people who stop by and put things in there and we’ve been putting tomatoes in there and they don’t last long before they’re gone.”

Memories of Queen Elizabeth II from a Walla Walla gardener |