Total construction spending continues to roar ahead of its 2021 pace, led again in March by another double digit increase in the residential component. The U.S. Census Bureau says the investment in all types of construction was at a seasonally adjusted rate of $1.731 trillion in March, an 0.1 percent gain compared to February and up 11.7 percent year-over-year. So far in 2022 there has been a total of $376.337 billion spent, 12.0 percent growth compared to the first three months of last year.

Spending in the private sector increased 0.2 percent from February to March at an annual rate of $1.380 trillion. The residential share of that spending rose 1.0 percent month-over-month compared to a gain of 0.7 percent in February. The annual rate in March was $88.045 billion, up 18.4 percent compared to March 2021. The non-residential component fell 1.2 percent from the prior month but is still 8.5 percent higher than in March 2021.

Na Zhao, analyst for the National Association of Home Builders (NAHB) said the monthly growth in residential spending came from new single-family construction at $472.6 billion a 1.3 percent increase from February and 18.5 percent year over year while multifamily spending slipped 0.5 percent. Spending on home improvements also rose 1.1 percent for the month.

Zhao says NAHB’s construction spending index illustrates the solid growth in single-family construction and home improvement from the second half of 2019 to February 2020, when the pandemic hit, and the quick rebound since July 2020. New multifamily construction spending has picked up the pace after a slowdown in the second half of 2019. However, he says home building is still facing supply chain issues, which means the industry is dealing with rising material costs as well as ongoing labor shortages. 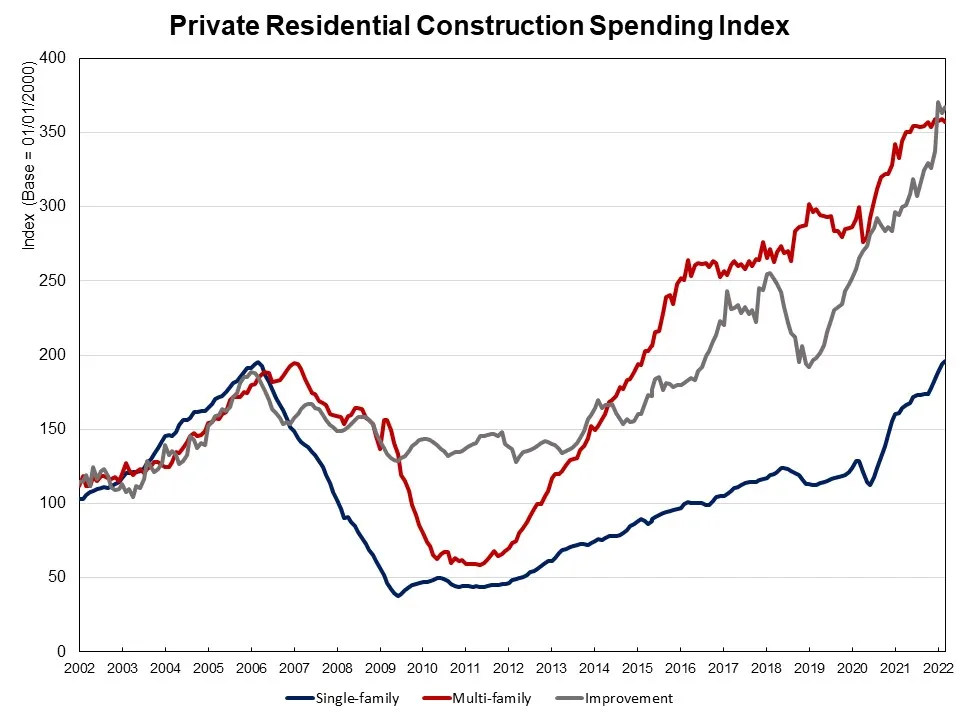 Residential spending jumped by nearly $11 billion on a non-adjusted basis in March and year-to-date spending is up 18.8 percent from last year. The gains were again disproportionally in single-family building, up 19.8 percent during the first three months of 2022 while there has been only 5.0 percent growth in multifamily construction spending.

Public sector spending slowed 0.2 percent from February to an annual rate of $350.816 billion, a 1.7 percent annual increase. YTD spending is up 0.7 percent compared to 2021.